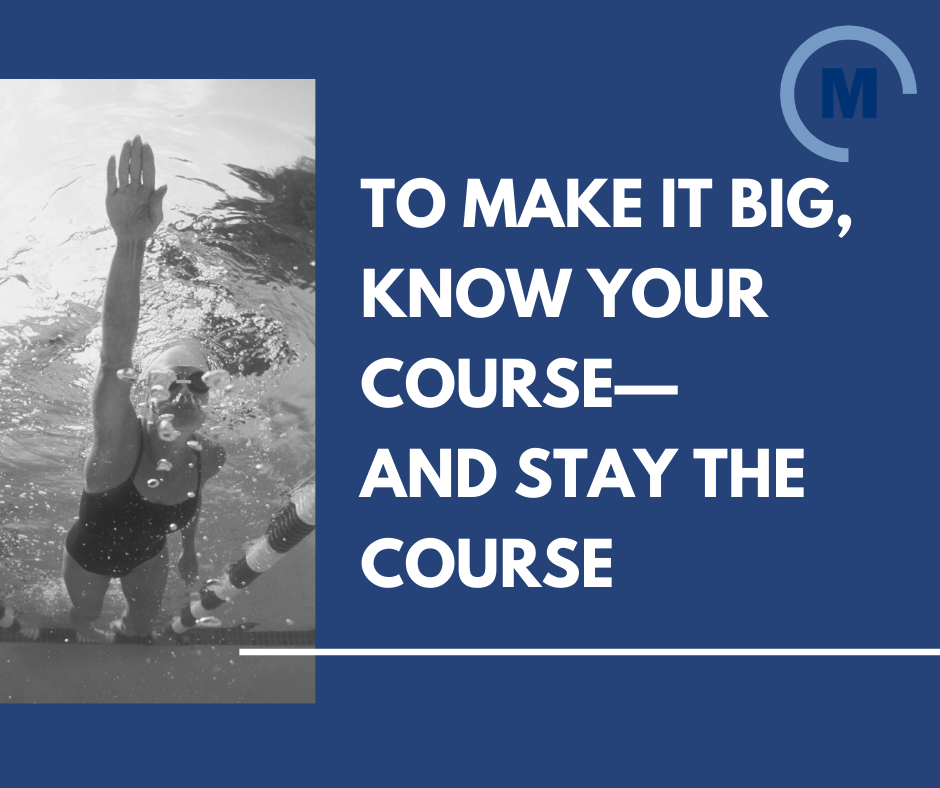 To Make It Big, Know Your Course—And Stay the Course

The self-made Super Rich—those people with a net worth of $500 million or more that they’ve earned through hard work, such as entrepreneurship—have a few key habits that have an outsize impact on their great success.

One of the key habits we see is the ability to deeply understand what they do extremely well that generates significant wealth coupled with the discipline to stay focused on doing those specific things.

In short, they know the right course to run on—and then they stay on that course.

Here’s how to take a page from their wealth-building playbook.

To achieve significant success in your endeavors—including building significant wealth—you should be focusing on what you bring to the table that a) you do exceptionally well and b) empowers you to generate great success. Both conditions are needed.

How do you get there? Experience is often your best possible teacher. To become truly adept at anything takes time. Ten years of concentrated hard work and career-expanding experience is often cited as a requirement for becoming exceptional at a skill. It’s over these ten years or more that you identify what you’re especially good at that is also convertible into money—lots of it—and learn how to most effectively use those skills and knowledge. Mistakes are a powerful way to learn what not to do. But it often takes time for trial and error to run its course and reveal its lessons. It takes time before you can master the nuances, get that intuitive feel for what you do best, and be able to really use your skills and talents to become exceptionally wealthy.

You’ve likely been in quite a few different environments over your life. Some were more comfortable than others. Some you added a lot to, and some you didn’t. Think of situations in your life or career where you were able to significantly contribute and where those contributions helped move you to greater success and wealth. As precisely as possible, identify the ways of thinking or skills or abilities you brought to the table. As you review a number of such situations, identify the capabilities that overlapped.

This is your “course.” It’s what you are best at that translates into personal wealth.

Important: Be sure to home in on the skills that really count. You likely have many skills and talents. However, it’s also likely that only a very small number of them are the ones that are truly instrumental in enabling you to generate great success. That’s what we see with many of the self-made Super Rich. While they may be able to do a lot of different things well, there are usually just a handful of things that they really excel at that also make a meaningful difference.

After learning the best course, a characteristic of the self-made Super Rich is to stay the course. They stick to what they know they do extremely well, and they rarely deviate from their course or get distracted by “shiny objects” that cross their path.

Once you know what you do extremely well that also is highly profitable, you need to ensure that you are not derailed. Concentrate on the abilities that can be monetized. Minimize time spent on skills and talents that do not translate into personal wealth. Don’t be overly concerned about shoring up skill areas where you’re lacking—you’ll likely just end up with what we call “stronger weaknesses” instead of mastering new capabilities.

Of course, you can’t just ignore tasks and responsibilities that aren’t your strong suit. That’s where delegating comes into play. The Super Rich tend to be excellent at delegating whenever and wherever possible—especially in areas where they aren’t extremely high performers. That’s because the Super Rich tend to know the skills and talents they don’t possess that are nonetheless important in enabling them to amass significant personal wealth. So they seek out these abilities in others—employees, freelancers, strategic partners, third-party providers and the like.

Bonus: When you focus only on your strengths, those strengths can become even greater—helping you become more refined and more proficient. That, in turn, can help you build even more wealth.

Straying from the course

We find that the Super Rich tend to do a much better job than others at intensely focusing on skills that leverage their moneymaking abilities. But they aren’t immune to temptation. Even the Super Rich can stray from their course, usually with adverse results.

There are a number of possible reasons for this, but the most common one is hubris. When people generate significant success over and over, it can give them the idea that whatever they touch will essentially turn to gold. When this happens, these people often drift from the course that made them wealthy.

Example: Consider an entrepreneur who built a widely profitable manufacturing company. His intimate understanding of the psyche of engineers and his in-depth knowledge of logistics were instrumental to his company’s success. The problem is that these insights and abilities are not always transferable to other fields—something the entrepreneur didn’t appreciate. When he later set up a production company to make movies, he lost most of his fortune.

Another example: An entrepreneur was able to craft a great vision for her company that inspired her partners and employees, as well as vendors and suppliers. Her motivational skills were exceptional. She focused on the big picture, not the details. However, when it came time to sell the company, motivational skills alone were not enough to ensure the best price. Her unwillingness to delegate some of the negotiations resulted in her making some unforced errors—and not maximizing the value of the business.

The upshot is that even the Super Rich can sometimes forget their limitations when it comes to personal wealth creation. When they do, and they think they’re great at things they’re not, the outcomes are usually poor.

Don’t fall into the trap

The same logic likely applies to you, too. Excessive self-confidence born from a long track record of profitable endeavors can prove disastrous when people fail to stay the course. If you cross over from confidence to arrogance and delusional self-importance, you may end up working on endeavors requiring proficiencies you simply don’t have. If you’re unwilling to give up some control through delegation, this can set the stage for wealth erosion instead of creation.