Preparing for the Worst

When it comes to protecting themselves from truly awful, black-swan-type events, the Super Rich—those with a net worth of $500 million or more—take some pretty extreme measures.

Can their defensive moves inform your own efforts to create a plan for safeguarding yourself, your loved ones and your property?

Here’s a look at how some of the wealthiest families out there are positioning themselves to deal with global catastrophes—and how you might be able to borrow their methods in your own efforts.

The Doomsday Clock, which is meant to show how close humanity is to catastrophic destruction, has moved slightly forward in recent years, due to concerns about rising nuclear threats and climate change. Because of this, we’re seeing a growing number of the Super Rich taking steps to survive if global calamity strikes. It’s all about implementing strategies designed to enable them to effectively deal with worldwide, society-devastating disasters such as world wars and collapsing governments.

Taking this perspective is commonly referred to as radical self-reliance, and it is likely to become more pervasive among the wealthiest people in the world.

Here’s an example of what we mean. A billionaire purchased an extensive property far from his home country. On it, he built a well-protected home that could be self-sufficient for close to 20 years. Only about a third of the home is above ground, with the remainder below. The team he hired worked out evacuation protocols for him and family members that would expeditiously move them from their current locations to this secure location.

Among the Super Rich, this type of move is often referred to as “apocalypse insurance.”

In general, the Super Rich who take such steps believe there is a low probability of truly extreme situations occurring. But in their minds, the probability is higher than zero—and the consequences of inaction are severe.

Some of the factors we see motivating the Super Rich to acquire apocalypse insurance include:

Taking steps to deal with extreme socially destructive situations is becoming a rising concern among many single-family offices, which are entities established and run to address the financial and lifestyle concerns of extremely wealthy families. There are growing discussions around the likelihood of different cataclysmic scenarios and how to prep for them.

There are a wide range of actions the wealthy are taking that fall under the umbrella of apocalypse insurance. A common strategy, noted above, is to purchase homes in remote parts of the world. The idea is that the conflicts and disasters are not going to impact all parts of the world to the same extent. The thinking here is that buying in remote locations could make it possible to ride out the worst of any calamity.

Another approach is constructing safe environments. For example, some extremely wealthy families are building fully equipped self-sufficient bunkers. These bunkers are well stocked with food and water to last years or even decades. They usually have sophisticated filtration systems and solar panels or windmills for power. Interest in such environments rose significantly last spring as the coronavirus spread.

Wealthy families who do not want to build their own bunkers might consider condo-bunkers—built in previously abandoned missile silos, military bunkers and the like. They are heavily fortified installations to house a small number of families. In case of disaster, the families make their way to the shelter, which is then locked down until the world is considered safe again.

Not surprisingly, apocalypse insurance is usually designed to ensure that the Super Rich’s wealth survives with them. For example, some billionaires have sophisticated evacuation plans that seek to ensure a sizable portion of their wealth remains available to them. These stores of wealth are often in the form of hard assets. Thus, if something happens that crashes the markets, for instance, they have other financial resources to draw upon. Even among survivalists, it seems diversification is a key goal.

It is important to note that the Super Rich we deal with by and large don’t believe “the end is near,” nor do they even want to survive if the world is turned into a nuclear wasteland. Still, some of these same extremely wealthy families are hedging their bets.

Learning from the Super Rich

Let’s be honest: Most of us do not have the financial means to implement apocalypse insurance strategies such as the ones profiled above. It’s just not an option.

Nevertheless, the underlying logic and approach used by many of the Super Rich when it comes to protecting themselves and their loved ones may be applicable and appropriate for a wide variety of people and families.

Many people evaluate risks, make decisions and take actions (often with the help of their advisors). But we find that most people just aren’t as systematic in this area as are single-family offices serving the Super Rich.

For example, you might consider adopting a step-by-step approach for thinking through possible disaster scenarios. It could look something like Exhibit 5. 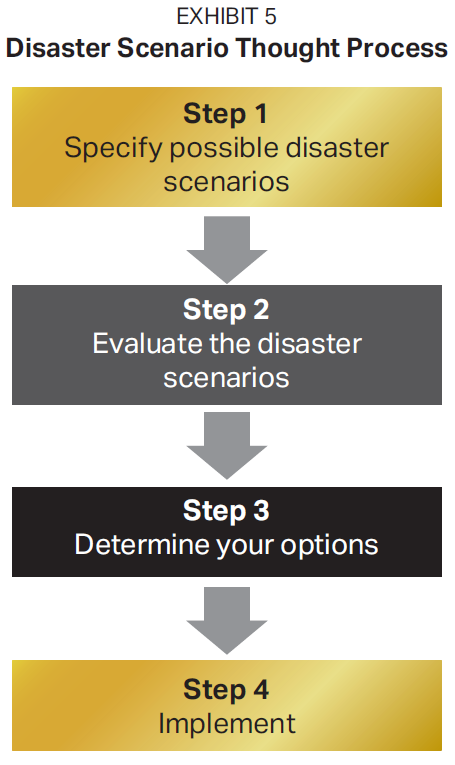 Ask yourself, “What can go wrong?” Don’t make it about the possible end of the world, but instead about what could be devastating—financially and personally—in your life. Health considerations, for example, often top the list. The potential for marital strife among your children can be another situation. These scenarios are pretty mundane compared with the complete collapse of the U.S. government followed by anarchy, but nevertheless, they can be quite damaging to your and your family’s well-being.

There are two factors you need to consider in assessing the conceivable impact of these adverse scenarios on your world. One is the likelihood of the scenario happening. For example, if you have a medical concern, and after sequencing your DNA, you conclude that there is an increased likelihood of the disease you are concerned about, then this disaster possibility rises. The other factor is the severity of the possible disaster. If the situation were to play out, how bad are the likely consequences?

Now ask yourself what you can do about what you’ve come up with. This step is where advisors can be especially helpful. Armed with a clear view of the scenarios that most concern you based on their likelihood and consequences, you can ascertain what actions you should consider taking. If it is a medical matter, for example, how might you best position your finances? Keep in mind that the best course of action could be to take no action at all.

Whatever you decide to do, you need to actually make it happen. This is often the relatively easy and straightforward part of the process—especially if you have professional help with implementing the solution or solutions.

It is evident to us that the turmoil in the world is motivating a percentage of the Super Rich to take action to protect themselves, their loved ones and in many cases their fortunes from some catastrophes.

Like them, you should be thoughtful and smart about your own risk planning around the worst-case scenarios you might find yourself in. For those who aren’t highly worried members of the Super Rich, there is still an opportunity to apply a systematic approach to thinking through apocalyptic scenarios that are more personal and closer to us.

The upshot: As we’re all so well aware, bad things happen in life, regardless of how much—or how little—wealth you possess. Thinking through those issues today could help better position you, and the people you care about most, for the next time an awful possibility becomes an awful reality.