How do the economic milestones of young adults today compare with prior generations?

If you're the parent of a young adult who is still living at home, you might be wondering whether this situation is commonplace. According to a recent U.S. Census Bureau study, it is: One in three young people (ages 18 to 34) lived in their parents' home in 2015.

The Census Bureau study examines how the economic and demographic characteristics of young adults have changed from 1975 to 2016. In 1975, for example, less than one-fourth of young adults (ages 25 to 34) had a college degree. Young adults in 2016 are better educated — more than one-third hold a college degree (or higher) — but student loan debt has made it more difficult for them to obtain financial stability, let alone establish homes of their own in their 20s.

The following pie charts compare four common milestones of adulthood — getting married, having children, working, and living independently — achieved by young adults ages 25 to 34 in 1975 and 2016. The data indicates that the experiences of young people today are more diverse, with fewer accomplishing all four milestones in young adulthood. Instead, many young adults are delaying or forgoing some experiences (marrying and having children) in favor of others (living independently and gaining work experience) 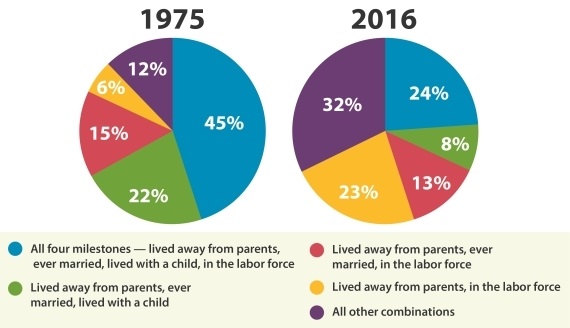 Despite the educational and economic advances that young adults have made over the last 40 years, many are postponing traditional adult milestones. In fact, a majority of young adults are not living independently of their parents. Of the 8.4 million 25- to 34-year-olds still living at home, one in four are not attending school or working. It's important to note, though, that this could be because they are caring for a family member or have health issues or a disability.

Compared to 40 years ago, the timing and accomplishment of milestones on the path to adulthood are much more diverse and complex today. To view the full report, visit census.gov.