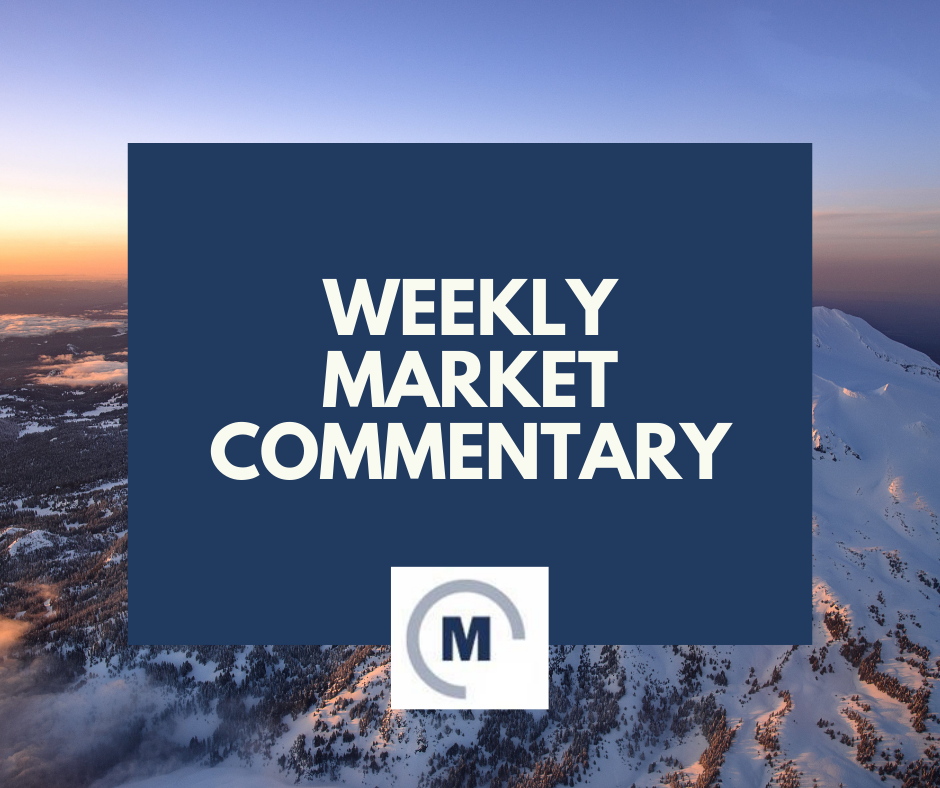 Stocks have been unable to make up much ground since the June 16 lows, with a bear market rally amounting to only around a 4.3% gain in the S&P 500 Index since then (as of July 1). After the more than 6% rally the week of June 24 and the increasing optimism that came with that bounce, stocks pulled back again last week—the 11th down week for the index in the past 13 weeks. While we acknowledge that a V-shaped recovery is probably not in the cards and prior valuation targets no longer appear achievable, we remain constructive on equities for the second half, but not complacent.

NOT OUT OF THE WOODS BUT SOME ENCOURAGING SIGNS

Clearly markets do not yet believe we’re out of the woods as debates about whether inflation has peaked continue while the Federal Reserve (Fed) stands ready to aggressively hike its target interest rate over the next few months (at least) while shrinking its bloated balance sheet.

But there have been some encouraging signs lately:

Also, consider the evidence that consumers are in pretty good shape overall heading into the latest inflation surge:

Just because consumers have some things going for them doesn’t mean the surge in inflation isn’t painful, nor does it necessarily mean the U.S. economy will avoid recession. LPL

Research places 50% odds of a recession within the next 18 months, so we’re not discounting that probability. The Fed’s spotty track record of fighting inflation without causing a recession does little to instill confidence.

The good news is that if the economy does contract to the point where it is officially labeled a recession (the National Bureau of Labor Statistics makes that call), the impact will likely be muted somewhat by the strong financial position enjoyed by consumers heading into it. Keep in mind that two straight negative GDP quarters is not sufficient to “qualify” for a recession. NBER’s broader definition will likely enable the economy to avoid recession in the first half regardless, though GDP may eke out a small gain anyway.

Other risks to keep an eye on include another possible spike in energy prices, which could push interest rates higher and weigh on the economy and stock valuations. Geopolitical tensions could escalate in Europe at any time (though we could also get a surprise resolution/cease-fire). Finally, the longer that inflation remains stubbornly high, the more aggressive the Fed will get with rate hikes, increasing the odds of a recession. Some components of inflation such as housing and wages will be very hard to bring down, and inflation can become entrenched the longer it lingers and potentially gets embedded in consumer expectations.

SO WHAT IS THIS MARKET WORTH?

Valuing stocks during periods of high uncertainty is tricky. On the upside, we think stocks may be worth more than 20 times earnings in a return to an environment of low inflation and low and stable interest rates. We’ll probably get there eventually, but that’s very unlikely to occur this year. Interest rates have only come down because of recession fears, while inflation will still be elevated—even if somewhat lower—when the calendar turns to 2023 (unfortunately).

So a P/E over 20 is probably too rich. Remember stock valuations are inversely correlated to inflation and interest rates.

On the opposite end of the spectrum, we know stocks have traded down to an average of around 13 times earnings during the lows of the past three bear markets. But our belief is that this economic and profit environment is better than in the early 1990s, early 2000s, or 20082009 and therefore supports higher valuations. Add to that our expectation that inflation will soon begin a steady march lower and that late-cycle valuations in the 18-19 range have been commonplace in recent decades. As a result, we believe a price-to-earnings ratio of 18-19 on 2023 S&P 500 earnings estimates is reasonable. As shown in Figure 1, a return to that multiple translates into potential double-digit returns for stocks over the rest of the year assuming earnings come through as we anticipated. 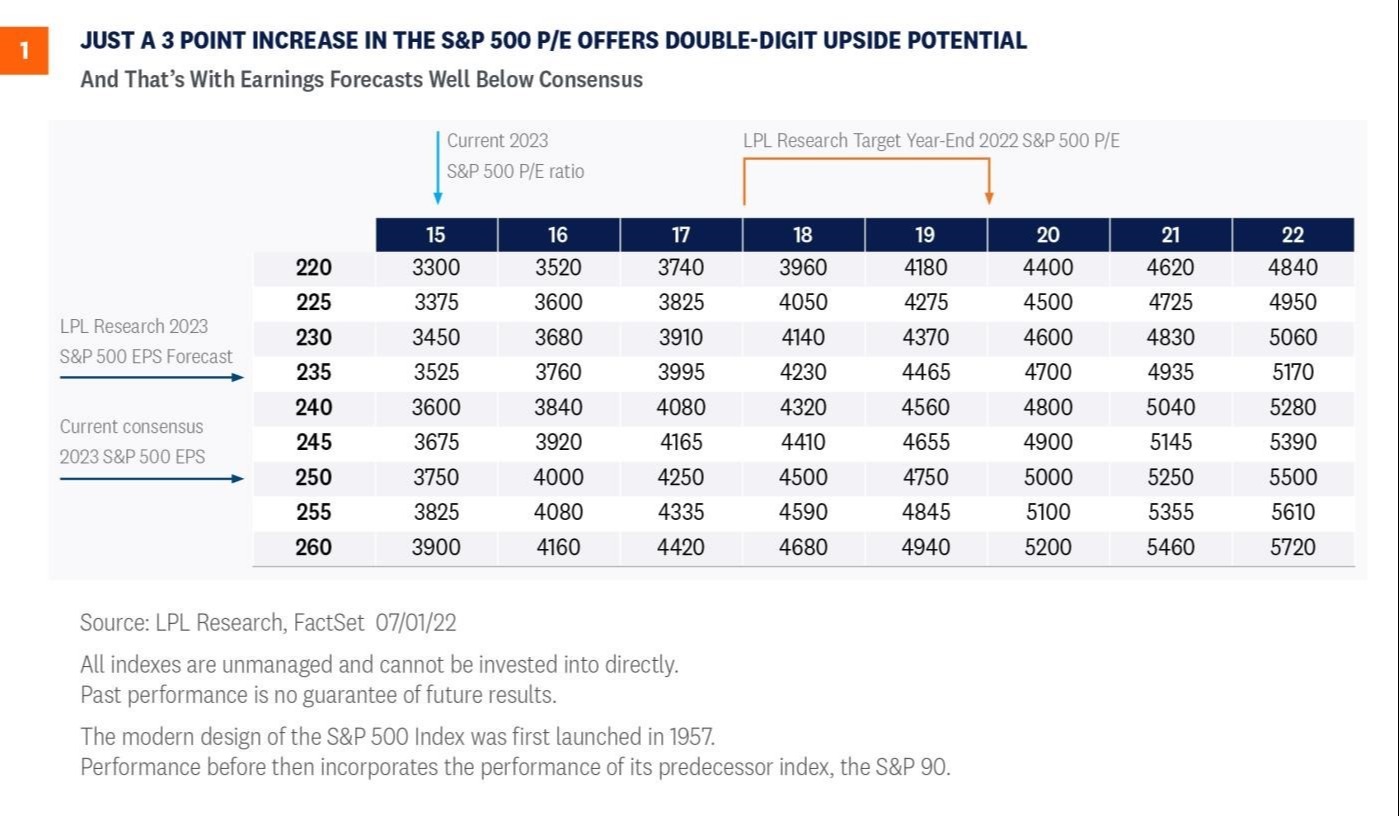 Solid first quarter results and resilience of estimates during the second quarter set corporate America up to reach, or possibly exceed, our $225 EPS estimate for the S&P 500 in 2022. Our forecast, which is $5 below the consensus estimate of about $230, is calling for an 8% increase this year. Much of that will likely come from the energy sector.

We believe this earnings outlook is sufficient to support a solid stock market turnaround between now and year-end. Though analysts’ bottom-up estimates haven’t come down materially in recent weeks, calls from strategists that numbers need to come down this earnings season are so widespread that the news may not have to be all that great for stocks to rally on results.

The percent of companies seeing estimates reduced has increased some recently, but the overall market cap weighted numbers have held firm. Results from early reporters with May quarters such as Oracle and FedEx were encouraging.

The risk-reward for stocks looks favorable to us at current levels based on what we see as more potential upside than downside. The average non-recessionary bear market decline has been about 24%, roughly in line with the most recent peak-to-trough decline. But for the double-digit percent upside to be realized by year-end, inflation has to start coming down soon, helping boost the economy on the back of consumers.

History appears be on the market’s side, as the S&P 500 could be poised for solid gains ahead:

Despite our still constructive—not complacent—stance, stocks warrant lower valuations based on higher interest rates and troublesome inflation picture. Our revised year-end 2022 fair value S&P 500 target of 4,300-4,400 is still more than 12% above the July 1 closing price at the low end, but is 10% below our prior target. We still expect a growing economy and solid earnings gains in the second half to fuel higher stock prices, though gains will likely be back-end loaded given the time it will take for inflation to come down enough for the Fed to signal a pause.

We continue to recommend an overweight allocation to equities and underweight to fixed income relative to investors’ targets, as appropriate. For more risk-tolerant investors or investors with neutral positioning, we would consider increasing equity allocations slightly, as the LPL Research Strategic and Tactical Asset Allocation Committee (STAAC) has done in July as more evidence that the market’s bottoming process is progressing has emerged.