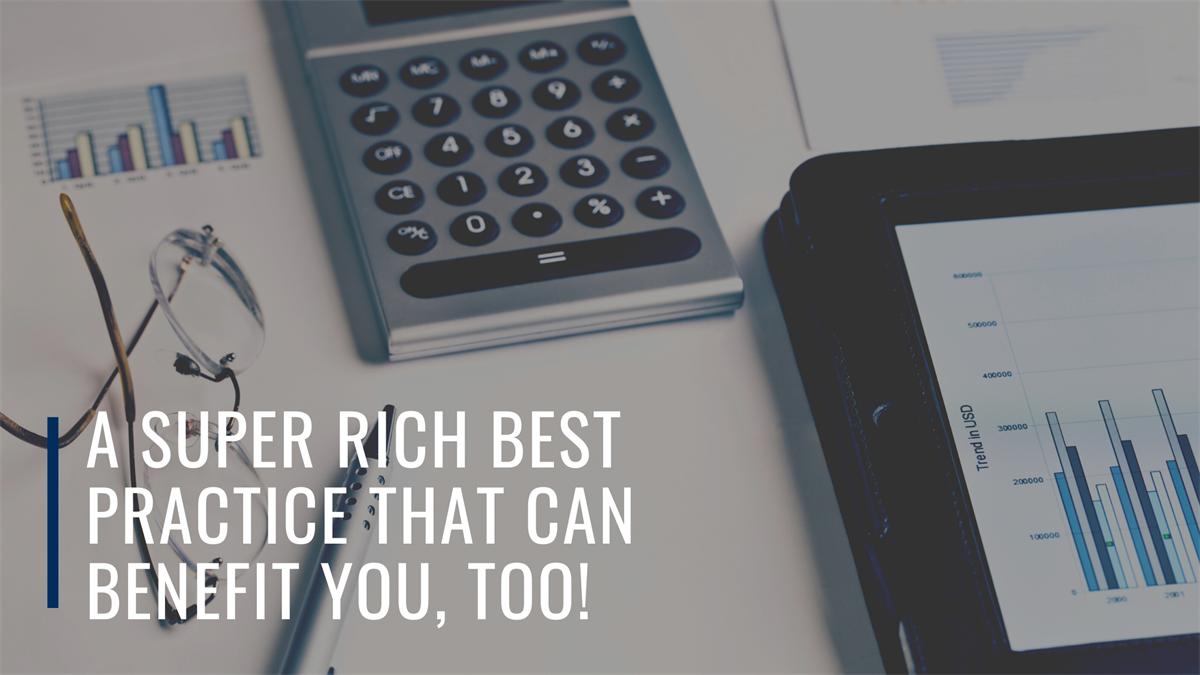 A Super Rich Best Practice That Can Benefit You, Too!

Stress testing is a process where a professional or a team of professionals carefully reviews the financial and related actions you have taken. The goal is to determine answers to two vital questions:

We find that stress testing tends to be very effective at catching errors—from the routine to the serious—that could negatively impact your wealth. It’s also a great way to identify better ways than those that are currently in place to address wealth management needs and goals. It can even, from time to time, spot actions that have been taken that may be pushing the limits of what is legal—or going beyond them.

Given all that, it probably won’t surprise you to learn that stress testing is quite common among the Super Rich—individuals with a net worth of $500 million or more. But stress testing is also becoming much more prevalent among successful and affluent families with “only” a few million dollars of net worth, as the best practices of the advisors to the Super Rich are increasingly adopted by more financial professionals.

Stress testing for the Super Rich versus the rest of us

That said, there is one major differences between stress testing the actions of the Super Rich and those less wealthy. Generally speaking, stress tests conducted for the Super Rich tend to find fewer errors and fewer opportunities for improvement compared to the less affluent among us (see Exhibit 1).

What is the reason for this difference? Most likely, it’s a function of the caliber of professionals engaged by many Super Rich families—particularly the families with single-family offices, which are entities set up to address the specific needs and wants of just one extremely wealthy family. The Super Rich’s approach to due diligence is usually intense, which helps them find highly skilled professionals.

However, when problems among the Super Rich’s wealth plans are found, they tend to be quite severe. These errors can often be very destructive to the wealthy family and their business interests.

Example: A Super Rich individual wanted a tax mitigation strategy he was using to be examined. He was actually quite proud of how ingenious it was and how well it worked. The complication was that some of his business dealings were being scrutinized and he wanted to make absolutely sure his wealth planning would not cause him any problems.

The stress test made it clear very quickly that he and his advisors had created a number of trusts, some dubious in nature, that held selected assets and income streams. A potentially criminal mistake was that by vertically layering these trusts, arguably fraudulent expenses were being charged to subsequent trusts—resulting in a decrease in taxable income. Simultaneously, the approach resulted in the illusion of separation of control to protect the assets in the trusts.

Creating abusive trusts and layering them the way he did can come in a wide variety of forms, with almost all of them clearly being used for questionable, if not illegal, purposes. It is analogous to Russian Matryoshka dolls where one doll is hidden within a similar doll. Unless all the dolls are opened, you cannot find the only one that is not hollow.

In this case, the Super Rich individual thought he was being smart about wealth planning. But what he was doing was actually illegal. Because of our stress testing, he completely redid all his wealth planning.

More mistakes among the less wealthy

Overall, we see that stress testing for less-wealthy families turns up more errors and more overlooked opportunities for improvements. The issues run the gamut—from mildly problematic (where some refinement can likely get the desired results) to much more severe (where the intended goals are not being achieved and the outcomes could potentially be very detrimental).

Stress testing can, for instance, often uncover deadly “backdoors” to a family’s asset protection plans. For example, we have seen that some extremely successful business owners and real estate entrepreneurs structure multiple company holdings in separate entities, but fail to insulate those entities from adversities that may occur in their personal lives. Among the Super Rich, these backdoors are more likely to be locked with the wealth planning equivalent of a deadbolt.

Why is stress testing likely to uncover more problems among the less wealthy than the Super Rich? The principal reason appears to be the level of capabilities of the professionals initially engaged. A meaningful percentage of these less-wealthy families may not be working with the highest-quality consummate professionals. They may not be engaging the same level of talent, knowledge, skills and drive as are a great many of the Super Rich.

Many of these less-wealthy families are probably dealing with professionals who, while intent on doing a good job for their clients, lack the expertise and ability to deliver optimal results. Complicating these situations is that often such professionals are unaware that they lack the expertise in question—in other words, they “don’t know what they don’t know.” It comes down to their level of sophistication, not their level of good intentions.

Why stress testing is needed

Families often question how they could have gotten into a situation where they have made potentially serious mistakes. When it comes to wealth planning, one of the principal reasons is that the original planning was done in a piecemeal manner—developed in a fragmented or disjointed way. This often happens when various professionals the family works with, such as advisors and accountants, don’t communicate with each other about the family’s situation as they see it or about their respective action plans for the family.

To see how this can be problematic, consider the prospect of building a house and having a different construction company build each room at different times—without talking with each other. Even if each construction company is top-notch, there is a very strong possibility that the completed house will have structural problems as a whole.

This incremental approach occurs far too often with wealth planning (even sometimes among the Super Rich). For example, one exceptionally wealthy couple first set up trusts for their children with one lawyer. Later they set up a charitable trust and private foundation with another lawyer. Then after that, they did their estate planning with a third lawyer, who created several more trusts and some partnerships. When their overall planning was stress tested, it quickly became clear that all the different trusts worked against the current wishes of the couple to varying degrees. Ultimately, it was decided that everything needed to be redone—an extremely costly fix.

The upshot: If you are at all unsure about the actions you have taken, it’s a good idea to at least consider stress testing. And if you feel strongly that there could be errors or that you are not positioned optimally, it really makes sense to look into stress testing. By considering stress testing, you are enacting one of the best practices of the Super Rich—one that can potentially help them stay Super Rich.

ACKNOWLEDGMENT: This article was published by the VFO Inner Circle, a global financial concierge group working with affluent individuals and families and is distributed with its permission. Copyright 2020 by AES Nation, LLC.

This report is intended to be used for educational purposes only and does not constitute a solicitation to purchase any security or advisory services. Past performance is no guarantee of future results. An investment in any security involves significant risks and any investment may lose value. Refer to all risk disclosures related to each security product carefully before investing.